The first workshop of the DELOS Initiative

The first workshop of The DELOS Initiative, part of the WCPA Task Force on Cultural and Spiritual Values of Protected Areas, was held from November 23-26 in the Monastery of Saint Mary of Montserrat, nested in the Mountain of Montserrat Natural Park. Montserrat is a holy mountain, located in the Barcelona Metropolitan Area, Catalonia, Spain.

The workshop was attended by participants from eight countries, as well as a group of observers from Catalonia, which included representatives of the Catalan government, local governments, academia, as well as some Catholic and Buddhist monks related to Benedictine, Cistercian and Sakya monasteries, located within natural protected areas around Barcelona.

Several case studies from Finland, Greece, Japan, Romania, Spain, United Kingdom, and the USA which had been prepared according to the pilot plan were presented and discussed, with the aim of distilling the lessons learned, to identify ways to promote positive synergies between the conservation of natural values and the conservation of spiritual and intangible values at the same protected areas.

In addition, the participants discussed the UNESCO-IUCN Draft Guidelines on Natural Sacred Sites, as it is felt that they should take in the points of view of mainstream religions, as well as a short position paper about the inclusion of the concept of sacred natural sites in all the IUCN categories for protected areas, to be presented in the WCPA summit of Seville, Spain, in March 2007.

All the participants considered that the pilot plan of The Delos Initiative and the workshop of Montserrat were a success and agreed on the need to move forward the Initiative, preparing a second workshop by the end of 2007 in order to be able to make a significant contribution to the 2008 IUCN World Congress.

The workshop was sponsored by the Board of the Mountain of Montserrat, the Ministry for the Environment and Housing of Catalonia, the Fundació Territori i Paisatge of Caixa Catalunya Savings Bank. Collaborators include the Monastery of Montserrat, Metsahällitus, Mediterranean Institute for Nature and Anthropos, Fundación de Estudios Tradicionales and Silene Association. 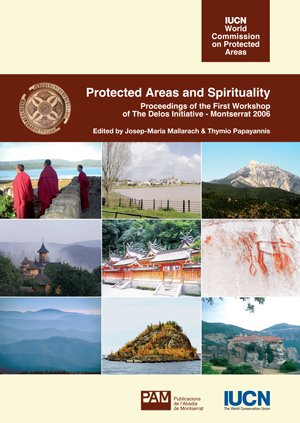 Catalan Federation of Climbing and Mountaineering

Board of the Mountain of Montserrat

Board of the Mountain of Montserrat

Natural Park of the Mountain of Montserrat