The third workshop of the DELOS Initiative

The third workshop of the Delos Initiative took place from 1 to 3 July In Inari, Lapland, Finland. It was organised jointly by the Delos Initiative and Metsähallitus Natural Heritage Services that was the local organiser and host. Metsähallitus Natural Heritage Services manages Finland’s state owned protected areas, including 35 national parks. The Ministry of the Environment and the IUCN National Committee of Finland also supported the event. The Sámi Museum and Nature Centre Siida at Inari, Finland was the venue of the workshop.

The workshop was attended by 30 participants from 14 countries. The theme of the meeting was ‘Diversity of Sacred Lands in Europe’. Interconnectiveness between human beings and the natural world, as well as the respect of indigenous people for nature emerged as key issues during the workshop. The participants were particularly impressed by the Sámi traditions and profound relation to nature, as well as the close co-operation between their Parliament and the Metsähallitus Natural Heritage Services.

In addition, the diversity of SNS in Europe and that of the minority faiths in the broader continent were examined during workshop sessions. Moreover, the management of lands of mainstream religions and of monastic communities was also addressed, and an evaluation of the IUCN-UNESCO Guidelines for Managers of Protected Areas on SNS was made.

The workshop programme included a visit to a Sámi sacred site the Ukonsaari Island on Lake Inari and a hike to Pielpajärvi Wilderness Church. Ukonsaari is recognised under the Delos Initiative.

The workshop proceedings will be published in book form in 2011 and will include texts of the contributions presented during the meeting. 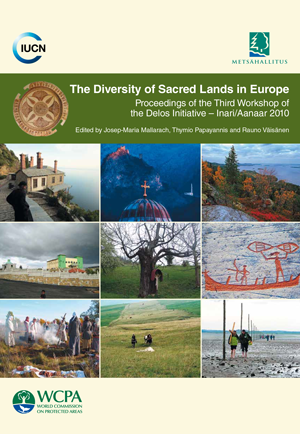 The Delos3 Workshop | Diversity of Sacred Lands in Europe

Save the Peaks Coalition – Founder

Gregoriou Monastery, Representative of the Holy Community of Mount Athos