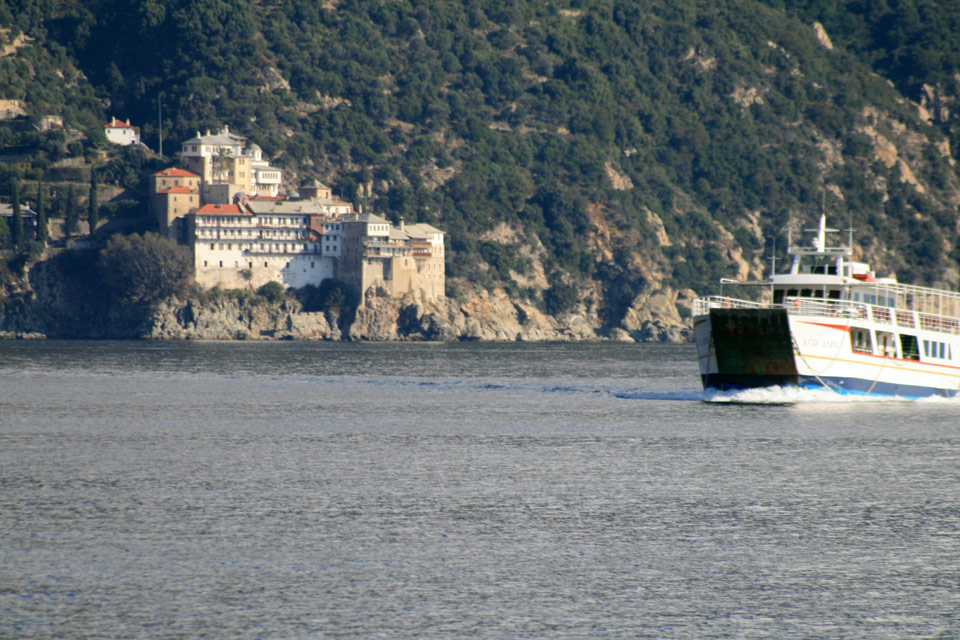 TAKING INTO ACCOUNT the inspiring message of HAH the Ecumenical Patriarch Bartholomew to the Workshop participants;

NOTING the positive content of the welcoming addresses to the Delos2 Workshop by the representatives of the Holy Community of Mt. Athos and of the Prefecture of Halkidiki;

CONSIDERING the contributions to the Workshop of the 22 participants from 11 countries in the form of case studies, papers and discussions;

EVALUATING the work carried out in the framework of the Delos Initiative during the past year;

THE PARTICIPANTS OF THE WORKSHOP
arrived at the following conclusions

Lessons from the case studies presented at the Workshop

All parties involved in sacred natural sites within protected areas should be encouraged to resolve in an equitable manner legal and land and resource ownership and use problems, as a prerequisite to achieving collaboration and synergy.

A rights-based approach and the empowerment of local communities should be promoted in all cases.

Through appropriate methods, the mutual awareness, sensitivity and capacity of both
custodians of sacred sites and protected area managers -as well as other interested parties- should be cultivated, leading to a common approach for conserving all relevant natural, cultural and spiritual values.

In this context, the establishment of joint approaches of research and learning among the key sides should be promoted.

The custodians of sacred sites should be fully involved in the development of management plans for protected areas, as well as participation in their management structures, and their contribution should be recognized and encouraged.

1 Conclusions of a Delos Initiative Workshop, held in Ouranoupolis (Greece) on 24-28 October 2007, in
the framework of IUCNIWCPA and its Task Force on Cultural and Spiritual Values of Protected Areas.

The right of custodians of sacred sites to limit access to certain areas should be respected and the appropriate measures should be included in management planning and public use, together with restrictions to visitor access in highly sensitive natural areas.

In addition, the participants of the Workshop agreed on the following specific points:

International conventions and organizations could play a positive role in supporting internationally recognized sacred natural sites and should be encouraged to intensify their efforts for this purpose.

Managers of protected areas, as well as relevant policy-makers, must be encouraged to respect the sanctity of Monastic sites and lands under their care and take them into consideration in planning, management and evaluation.

Monastic Communities must also be encouraged to manage their lands and facilities
in an ecologically sustainable and equitable manner.

For this purpose, a joint and integrated approach to management planning and
evaluation is required, which should be developed with participation from both sides.

Monastic sacred sites can provide useful inputs to education and public awareness
and their contribution should be encouraged in related protected areas.

In addition, the principles and practice of Monastic asceticism may provide profound lessons towards ecological life styles and the sustainable use of natural resources – as demonstrated by the experience of the Holy Convent of Chryssopighi.

In this context, the positive initiatives of the Holy Community of Mt. Athos in preparing a special environmental study and a strategic plan for the entire autonomous territory, as well as measures for its implementation, through the establishment of a management body under the Holy Monastic Community, with the support of competent scientists and government agencies, were noted with appreciation.

Efforts should be strengthened to sensitise mainstream faiths -both authorities and followers- to nature conservation and broader environmental issues.

The potential contribution of protected natural areas to the conservation of sacred sites and vice versa should be enhanced.

Particular respect and care should be addressed to indigenous sacred sites in developed countries, which should be safeguarded from insensitive development pressures.

The Delos Initiative towards WCC2

Priority should be given to the publication of the proceedings of the Ouranoupolis Workshop, together with the proceedings of the Montserrat Workshop, for dissemination during the WCC, as a contribution of the Delos Initiative to the ongoing dialogue on natural and cultural I spiritual values and to the implementation of conservation approaches that are sensitive to the cultures and values of all communities.

The Delos Initiative should contribute to the ongoing UNESCO I IUCN process for preparing guidance on sacred natural sites to be completed in 2008. In addition, the Delos Initiative should continue its systematic work for developing further guidance during the triennium 2008-2010 on the specificities of sacred natural sites in developed countries mainly for mainstream religions.

Additional case studies of sacred natural sites should be analyzed in the framework of the Initiative, with the goals to obtain more balanced geographical distribution, greater representativity of faiths and the recognition of successful examples, which can disseminate best practices and inspire emulation.

Naturally, the Delos Initiative is expected to contribute substantially to the appropriate events of the 2008 World Conservation Congress, within the framework of the WCPA Task Force on Cultural and Spiritual Values of Protected Areas.

The Initiative should examine potential synergy in its work with related international conventions and organizations, and especially with the World Heritage Convention.

Profound recognition is due of the broad and creative role played by HAH the Ecumenical Patriarch Bartholomew in bringing together faiths in favour of the Creation and the conservation of the natural environment, and sincere gratitude is expressed for his message of advice to the Delos2 Workshop.

Appreciation is also due of the official participation in the Workshop of the Holy
Community of Mt. Athos, of the Greek Ministry of Environment, Physical Planning
and Public Works and of the Prefecture of Halkidiki (Northern Greece).

The hospitable and highly informative reception of participants in the Sacred Monasteries of Varlaam in Meteora (Thessaly) and of the Assumption in Ormylia (Halkidiki) is also appreciated.

Special thanks are addressed to Med-INA (the Mediterranean Institute for Nature and Anthropos) for having organized the workshop with efficiency and sensitivity and having covered its costs -with the support of the A. G. Leventis Foundation.

1 Conclusions of a Delos Initiative Workshop, held in Ouranoupolis (Greece) on 24-28 October 2007, in the framework of IUCNIWCPA and its Task Force on Cultural and Spiritual Values of Protected Areas.
2 IUCN Fourth World Conservation Congress, Barcelona, Catalonia (Spain), October 2008.