Malta declaration of the fourth workshop of the DELOS Initiative 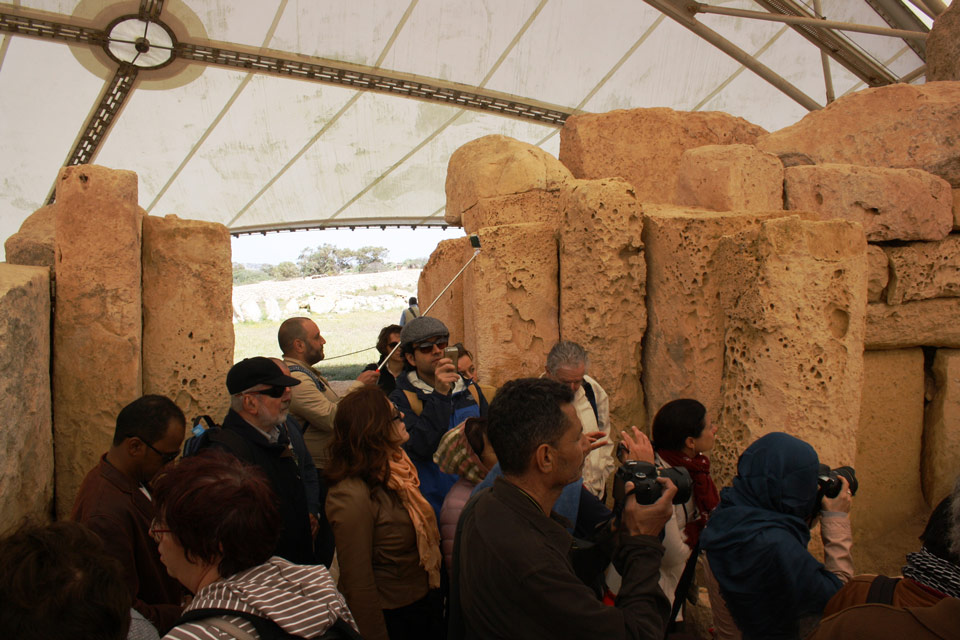 The participants from twelve countries (Bosnia and Herzegovina, Greece, Indonesia, Lebanon, Malta, Kyrgyzstan, Morocco, Serbia, Spain, Saudi Arabia, South Africa, Turkey), who have gathered in Malta, from 24 to 26 April 2017, during the Fourth Workshop of the Delos Initiative, agreed on the following conclusions:

Significant spiritual values are associated with natural sites in all the world’s religions, contributing to their conservation.

The concept of “sacred natural site” is used in this context as an umbrella term covering a wide diversity of types of areas, different management and governance regimes, and different nuances regarding the understanding of the spiritual values of nature. These can be translated in the main world languages with quite diverse terms, such as inviolable sanctuaries or sites, sacred precincts, holy places, dream sites, ancestral sites, places of spiritual power and many others. Many important nuances in this respect cannot be easily translated into the English language.

Diverse types of protected areas with spiritual significance are featured in Muslim communities that embody the teaching of human stewardship (khilafah) on the earth. Examples include the two sacred sanctuaries (harams) that encompass and surround the cities of Makkah and Al-Madinah; the hima, which reflects ethical principles of care and governance laid down by the Prophet Muhammad; and a variety of community conserved areas such as harim zones, hawtah, agdal, mahjar, qoroq, adat, doviste, mazarat, and kramat. These sometimes include conservation measures inherited from previous faith communities, deemed compatible with Islamic teachings.

For Arabic speaking countries, the word hima conveys normative elements, namely legitimate governance, objectives that pertain to the common good of humankind and other living beings, linking of conservation with sustainable use, and continued realisation of greater benefits than detriments. It conveys these values more effectively than do words derived from Eurocentric concepts of protected areas. This rich cultural heritage, which typically embodies co-management or governance by local communities, needs to be acknowledged as a relevant component of the conservation practices of Muslim communities, as recognised by motion 122 adopted by the IUCN General Assembly in 2012. In countries where himas exist, there is an urgent need for their legal recognition.

The effort to protect sacred natural sites is a significant part of the much-needed responses to halt the destruction of nature worldwide. If natural sites that have been deemed precious to the world’s religions fail to be protected, it will be very difficult to provide moral guidance to protect sites that do not have such sacred associations. Hence, special efforts should be made to address destructive processes in these sites.

Many sacred natural sites related to the world’s religions are threatened in some or all of their spiritual, cultural and natural aspects, be they located outside or inside protected areas. This is due to various factors, such as lack of public support, lack of collaboration from protected area managers, tourism, unsustainable or inappropriate development, armed conflicts, decline of religious and spiritual values, decline or vanishing of traditional governance organisations in charge of their guardianship, as well as religious fanaticism, which in combination are destroying an irreplaceable natural and cultural heritage.

The protection of the sacred natural sites related to the world’s religions represents a special challenge and opportunity that needs to be addressed while taking into consideration that some religious properties and sacred places can be an integral part of larger ensembles, which include historic buildings, cultural landscapes and natural sites. The significance of such sites and the interests of associated religious communities should be duly recognised in both governance and management processes.

The issues of authenticity, sustainability, and human rights to use the sacred natural sites in accordance with their contemporary understanding and needs and the rights to heritage and continuity need to addressed in order to define the border between development and destruction. The quality of wildness is essential to some sacred natural sites; efforts to improve access and facilitate visitation may degrade or destroy their natural and spiritual qualities.

Fostering a greater tolerance to the plurality of the world’s religious expressions would help many guardians of sacred natural sites, while supporting valuable local nature conservation efforts and safeguarding authenticity and continuity of practice.

Outstanding cases of sacred natural sites which are acknowledged by more than one religion, and in which the faithful have been peacefully collaborating for centuries, should be actively supported and encouraged, and their joint experience should be widely disseminated as a best practice.

The elaboration of national or regional inventories of sacred natural sites related to all existing faiths, assessing their vitality, conservation status and related threats is one of the best systematic ways to move these efforts forward, improving the visibility of marginalised or vanishing groups or practices. The recently completed inventory of such sites in Kyrgyzstan provides an inspiring example for other countries or regions to follow.

In many cases, the incentives for conservation of sacred natural sites stem from the traditional belief that well-being of individuals and communities is connected to the integrity of sacred places. Reciprocity, the interrelationship and mutual responsibility of the past and present, living and dead, ancestors and descendants, human and other living beings, embodied in the rituals connected to numerous sacred natural sites, provide inspiring criteria for conservation.

The continuing nature of the specific heritage related to world’s religions calls for dialogue and mutual understanding between the religious organisations and communities concerned and all other stakeholders, who need to work together to preserve the integrity and significance of all the dimensions of sacred natural sites. Acknowledging that sustainable management of such integral heritage is the responsibility of all stakeholders, and fostering mutual acceptance and respect will strengthen synergies to face effectively growing threats.
Religious organisations and faith communities have played and still play a significant role in the creation, maintenance, and continuous shaping of sacred places. For many centuries, they have been the traditional custodians of a very large number of sacred natural sites in most of the world’s ecosystems, caring for these as a living heritage. The rich conservation experiences they have developed in some outstanding cases, could be considered best practices. They can provide useful guidance to inspire solutions to the severe challenges that face other sacred natural sites, as well as the natural heritage in general, especially in those parts of the world where society shares similar religious values.

The effective holistic protection of the heritage of sacred natural sites requires a comprehensive understanding of all its dimensions, overcoming artificial barriers between natural, cultural and spiritual, using participatory approaches and relying on local level authorities and local communities – including minorities and marginalised groups – to better take into consideration local needs and local support.

For archaeological landscapes with sacred associations, past or present, it is recommended to develop interpretation and public use in ways that respect and meaningfully convey the sacred associations of those landscapes to visitors, and to conserve, whenever feasible, the natural as well as cultural features of such landscapes.
Concerning specific sacred natural sites, the participants noted the following:

The importance of conserving the integrity of the remaining natural sites within the two sacred sanctuaries that encompass and surround Makkah and Al-Madinah, which are visited by millions of pilgrims each year – in view of their potential role to embody harmony between humankind and nature and express human stewardship on the earth – and to spread environmental consciousness worldwide.

The success of hima revival to conserve sites of high biodiversity value in Lebanon (18 himas in six Important Bird and Biodiversity Areas since 2004) demonstrates the importance of community-based initiatives to supplement the network of protected areas established and managed by government, as does the mobilization of local youth as Homat al-Hima (Hima Guardians) to support these areas through environmental monitoring, rehabilitation, communication to raise awareness, and managing visitation.

The ecological restoration project of the Jordan River, in Jordan, Israel and Palestine, which is beginning to be implemented, is an inspiring example to recover the ecological integrity and beauty of this valuable sacred natural landscape through the collaboration of environmental organisations based on the three countries and the three religions involved, overcoming political obstacles.

The threats to the integrity of the Skadar Lake (shared by Montenegro and Albania), and Mount Rumija (Montenegro), should be averted, halting harmful developments within the Lake Skadar National Park, taking into consideration not only the exceptional significance of the natural heritage, but also the cultural and spiritual importance of the lake region and the restoration of the sacred buildings and practices such as the processions to Mount Rumija.

Sacred natural sites are the prominent components of the religious identity and cultural sustainability of many religious groups. Decision-making about their protection and management often reflects the power dynamics and inequalities that create differences in interest, capacity and willingness to participate. To achieve greater participation in the conservation of sacred natural sites, formal and informal mechanisms that meaningfully involve marginalised groups are required. For example, the Alevi-Bektashi group’s cultural heritage areas in Turkey require protection in collaboration with related institutions and active participation of the group’s custodians.

The revitalization of traditional customary practices collectively known as adat in Indonesia, the country with the largest Muslim population, as well as some of the highest concentrations of biodiversity on Earth, shows exceptional promise. Community-based conservation practices associated with the Islamic faith in Sumatra – forests governed by customary law (hutan adat), village forests (hutan nagari), protected forests (hutan larangan), and protected rivers (lubuk larangan) in which the harvesting of fish is prohibited for various periods of time – show affinity with the hima and harim zones. These and similar community-based conservation practices merit further legal support, publicity to raise awareness, and dissemination as best practices.

The participants want to express their gratitude to the University of Malta for their support to the organisation of the workshop, and to the MAVA Foundation and MedINA for funding it.

1 The Delos Initiative is part of the International Union for the Conservation of Nature, World Commission of Protected Areas and operates within the framework of the Specialist Group on Cultural and Spiritual Values of Protected Areas (CSVPA SG).