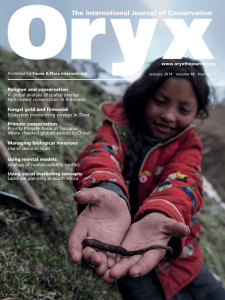 Three renowned ecologists from Sweden and Australia (Grzegorz Mikusinskia, Hugh P. Possinghama and Malgorzata Blicharska) have writen an article on the vital role of great religions could play in helping to save the world’s declining wildlife and wilderness.

The scientists report a strong connection between areas with high conservation needs and the world’s great religions and suggest that religious communities should be more involved in the conservation agenda. The inclusion of conservation issues in religious ethics could prove beneficial for biodiversity.

Grzegorz Mikusinski from the Swedish University of Agricultural Sciences states that the analysis suggests that most of the focal areas are found in countries where Christianity dominates and specifically Roman Catholicism. Further, there is an overlap of biodiversity significance with Buddhism (Southeast Asia), Hinduism (Indian subcontinent) and Islam (Asia Minor, parts of North and Central Africa).

According to the authors, the methods used so far by administrations and conservationists have not yet halted biodiversity loss, and people have not successfully incorporated biodiversity conservation issues in their everyday practices. Religions could have a catalytic role in influencing people’s attitudes towards nature if they included environmental concerns in their agendas, therefore, they should be considered more seriously in biodiversity discourse.